I don't write very fancy UIs; those of you who use my program probably already know this. The main reason for this is that I tend not to put a whole lot of time into making them fancy, because for me it has a low return for the amount of time I have to invest in it. Also, I'm not interested in spending a whole lot of CPU power on one either — why slow down a capture or a render with a UI that takes a lot of clock cycles to redraw? I do have one rule about UIs, though, and that's to use combo boxes very sparingly. Preferably not at all in new UI. Combo boxes take too many clicks, since you have to either waste a click for the drop-down or drag awkwardly X11-style, and I find that listboxes or lists of options look better and are easier to use. That's why in most of VirtualDub's more recent dialog, you see a lot of option sets instead.

And then, in the .NET Framework WinForms library, there is... the property grid.

A property grid is a generic UI widget that displays lists of properties, which can have values of type text, boolean (true/false), or even custom ones like colors. Properties can be separated into groups, and there are buttons to allow the user to sort the list of properties. There is also a pane at the bottom that holds help text for the property.

After using several .NET WinForms-based programs that use property grids, I've now come to a conclusion: I hate property grids. I hate them enough that I think they deserve a Joel Spolsky level rant and should be abolished from production UI.

Now, you might think... why does he hate property grids so much? Well, as an example, take the Visual Studio 2005 resource editor.... 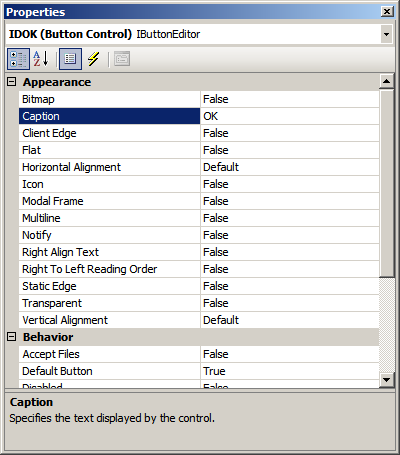 This is how options for a button are displayed. VS2005's resource editor, like the older VS2002/2003 resource editor, uses property grids for changing the appearance and behavior of controls in a Win32 dialog. Why does this UI suck so much?

Now, you might think this is just the fault of the Visual Studio 2005 resource editor. But no, the C++ Project Properties panel was similarly changed from a dialog to an annoying property grid. And I see property grids pop up in lots of UI in other .NET WinForms-based programs, with all the same sorts of usability problems: hard to read, hard to use, wasteful of screen space, mixed-heap-o-mostly-useful-and-mostly-useless options. I cannot think of a case where a UI that uses a property grid couldn't be improved in usability by replacing it with a panel of regular UI widgets, tabbed if necessary. And my hatred of property grids has nothing to do with it effectively making every property into a combo box.

Having written a little bit of C# code, I also know why the property grid is used as much as it is: it's easy. You just create a set of properties in a class with suitable attributes, and then attach an instance of the class to the property grid, and you magically have an interface. Change the class, and the property grid changes along with it. Unfortunately, I think the amount of time saved coding is not nearly justified by the horrible user experience. (I also wonder how you localize it.)

Appendix: Not about property grids, but while I'm talking about the resource editor....

In VC6, double-clicking a control brings up its options dialog. In VS2005, it brings up the Add Class dialog, defaulted to the CLR category and adding a WinForm-based class. Because attaching a .NET WinForms-based class to a Win32 button in an .rc file in an native project is so much more useful than displaying button properties....

VS2003 had a serious bug with randomly corrupting symbolic IDs to hardcoded numbers in .rc files. Supposedly that's fixed in VS2005; it was going to be postponed until post-ship, but the suggested workaround was bogus and the fix seemed to go in pretty quickly after the votes on the bug on the MSDN Product Feedback Center shot up past 15 in a short time....

String tables and menus are places where the VS2003/VS2005 resource editor experience is actually better than in VC6, because you can type in the strings in-place rather than having to bring up a dialog for each one.

Between VS2003 and VS2005, the C# project settings were moved from a property grid in a dialog to a document page with tabs and regular style checkbox/edit/combo widgets. That it's a document is weird, and the spacing is goofy enough that it looks like a goofy web page instead of a dialog (maybe it is a web page?), but it's a step in the right direction. Unfortunately, the C++ project settings didn't make a similar move.