Okay, back to something VirtualDub related. :)

I went ahead and did some more work on the vdshader filter, and thus I present version 1.2:

This version has two major enhancements:

The combined effect of these two changes is that you can now make new VirtualDub filters entirely in vdshader, without writing any C++ code. The individual .fx files show up in the VirtualDub filter list, have their own config dialog, work in batch mode, and can be used just like any other VirtualDub filter written as a regular DLL.

Now, the performance of such a video filter won't be quite as good as a well-optimized C++/asm filter, but I've made some changes on that front, as well. First, vdshader now has an SSE2 JIT which transforms shaders into SoA form and does register allocations, thus running shaders much faster than the scalar x87 JIT. Second, the optimizer has been beefed up substantially and performs more optimizations, such as:

As an example, in the expression tex2D(src, float2(uv.x, pos*4-1)), the optimizer will identify that (pos*4-1) is an invariant, and hoist both it and the texture V axis clamp/wrap checks out of the loop. These optimizations are particularly useful for tunable parameters, where you can perform complex preconditioning on the parameters and the optimizer will ensure that the calculations are done only once before entering the pixel loop.

There are several other improvements:

Example of a custom shader after the jump.

We'll use this file as an example:

With vdshader.vdf in the plugins or plugins32 subdirectory under VirtualDub.exe, and with this file saved as FXFilters\test.fx underneath that, this filter will then show up in the filter list: 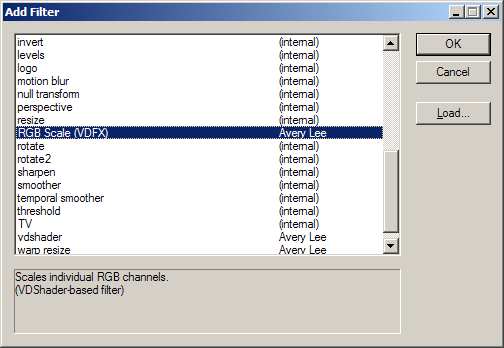 Add this filter to the list and hit Configure, and vdshader automatically creates a configuration dialog based on the tunable parameters: 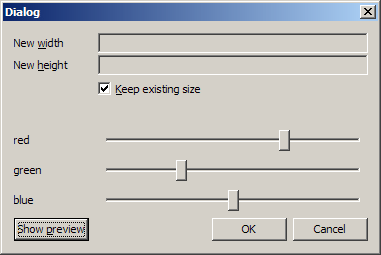 The configuration dialog exposes each tunable float parameter as a slider, and supports live preview functionality as well. (As I write this, I notice that I forgot to add code to change the dialog caption from "Dialog." Whoops.)

And finally, choosing the base vdshader filter brings up the IDE as usual, where you can interactively edit shader .fx files. 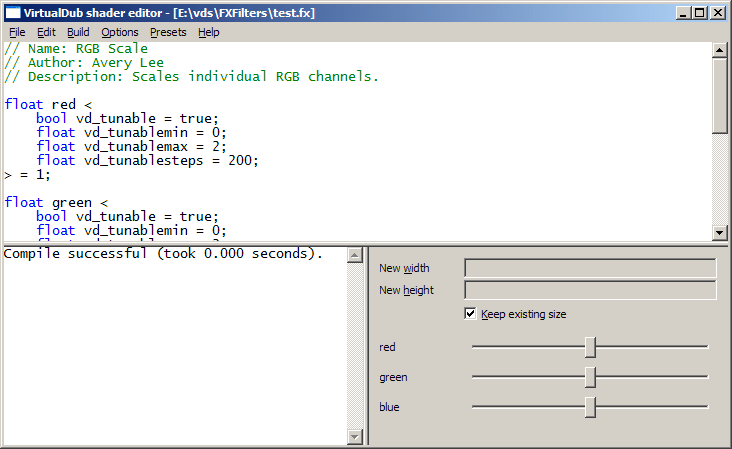